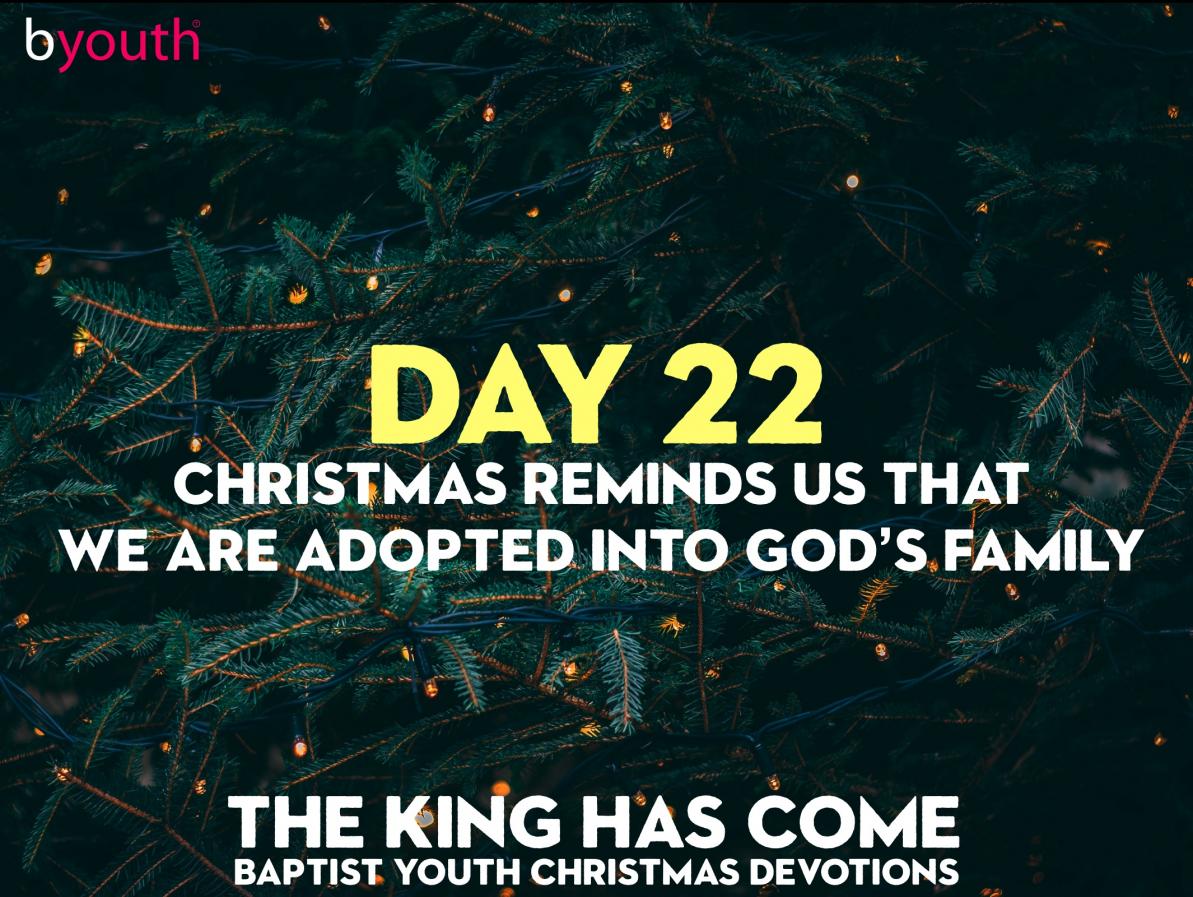 I wonder did you watch the Royal Wedding a number of months ago? I'm sure some of you sat in front of your TV screens for hours watching the whole thing live. For the rest of you (probably the boys), I'm sure you saw, at the very least, some of the highlights. But after a couple years of dating, Prince Harry and Meghan Markle finally tied the knot.

Some of you may have seen, on the run up to the wedding, an iconic photo which circulated social media. It was a picture of Megan Markle about 20 years before her big day. She was standing, as a fresh faced teenage girl, outside Buckingham Palace with her friend. As she got her picture taken, little did she know that in a number of years, she herself would be royalty and that palace would be her residence.

But imagine with me, for a moment, if on that day of visiting Buckingham Palace as a tourist, Megan Markle tried to enter through the front door to see the Queen. How successful would she be? I would suggest, not very successful. In fact, she wouldn't get passed the first guard. Why? Because she is simply a tourist like everyone else. She has no right to waltz into the presence of royalty.

However, today if Megan Markle tries to walk through the front doors of Buckingham Palace to see the Queen, can she do it? Absolutely! In fact, she probably does it quite regularly. What has changed? At the end of the day, she is still the same person. However, one extremely significant thing has changed - she married Prince Harry. It is purely on the basis of her union with Prince Harry that Megan now has access to the Queen. It has nothing to do with her achievements, looks or background. With her union to Prince Harry, Megan has access to royalty that she could never of dreamed possible - she has been grafted into the Queens family!

As Christians, the same is true for you and I. Because of our sinful core, we have no right to have access to the God who made us. We don't deserve to be associated with him or to enjoy his kingly presence. But having seen how Jesus redeemed us in yesterday's devotion, today we see the second blessing Jesus has brought us by his coming to earth. What is this blessing? Because of Jesus, we are adopted by God. In other words, because of Jesus we are grafted into God's family. Just as Megan was granted access to the Queen because of her union with Harry, you and I have been granted access to the King of Kings through our union with Christ. Jesus has made it possible for us to have a relationship with the God who made us because, through Jesus, we are adopted into his family!

4 But when the fullness of time had come, God sent forth his Son, born of woman, born under the law, 5 to redeem those who were under the law so that we might receive adoption as sons

Because of God's sending of Jesus to earth, we who trust in him have been adopted into God's family! How amazing is that? You have intimate and immediate access to the God who holds the Universe in his hands purely because of your faith in Jesus! What a comforting and reassuring truth this morning!

However, if you are honest, sometimes it doesn’t feel like you are adopted. Sometimes we don't feel like we have direct access to God. Sometimes in our fallen world, God can feel distant. This is because, even though we are 'legally' adopted, in another sense we have yet to experience the full benefits of our adoption. The Bible speaks in two dimensions, we are both adopted now (as Paul says here in Galatians 4:5) but we are also awaiting our adoption (See, for example, Romans 8:23).

Let me illustrate this for you. Imagine a couple go into an adoption home. They identify a child they want to adopt and take home. They speak to the relevant social workers etc. and then sign the adoption papers. In that very moment, as soon as those papers are signed, is the child adopted? Absolutely. That child is 100% adopted. However, has the child experienced the full benefit of their adoption? No! They haven't seen their new room. They haven't met their new wider family. They are legally adopted but haven't yet experienced the full benefit of their adoption.

The same is true for you and I! Because of our union with Christ, we are 100% adopted. The papers have been signed! It is a permanent and secure action. However, we are still awaiting the full benefit of our adoption. And these benefits won't be fully seen until Jesus returns. I have found Rico Tice's words so profoundly helpful when he says:
'The truth is that you haven't yet known 99.9% of the blessings of the Christian life, because they're in the world to come. If you don't believe me, let’s talk again in 10,000 years time!'

Christian, take confidence today that you have been adopted into God's family. Like any father, God loves you and wants to protect you as his own. However, don't be fooled into thinking this is all there is. We are still waiting for our adopted Father to bring us home to the place where, as the apostle Paul tells us, our citizenship lies - the new heavens and the new earth! Only then will we realise the full benefits of our adoption.

1) How does the picture of adoption help you to understand your relationship with God?

2) It is purely on the basis of your union with Christ that you have been grafted into God's family. How does this cause you to be thankful for Jesus' coming today?

3) Read Rico Tice's quote again. How does this encourage you in the midst of your struggles and difficult circumstances today?

God, thank you that, because of Jesus, I have been adopted into your family. Thank you that, although there is nothing that I could have done in order to be granted access into your holy presence, it was purely on the basis of my faith in Christ that allows me to be in relationship with you. Help me to never take for granted the privilege that I have to be able to call you 'father.' May you give me a vision for heaven today where the full benefits of my adoption will be realised. Help that to motivate me in the midst of my difficulties circumstances.