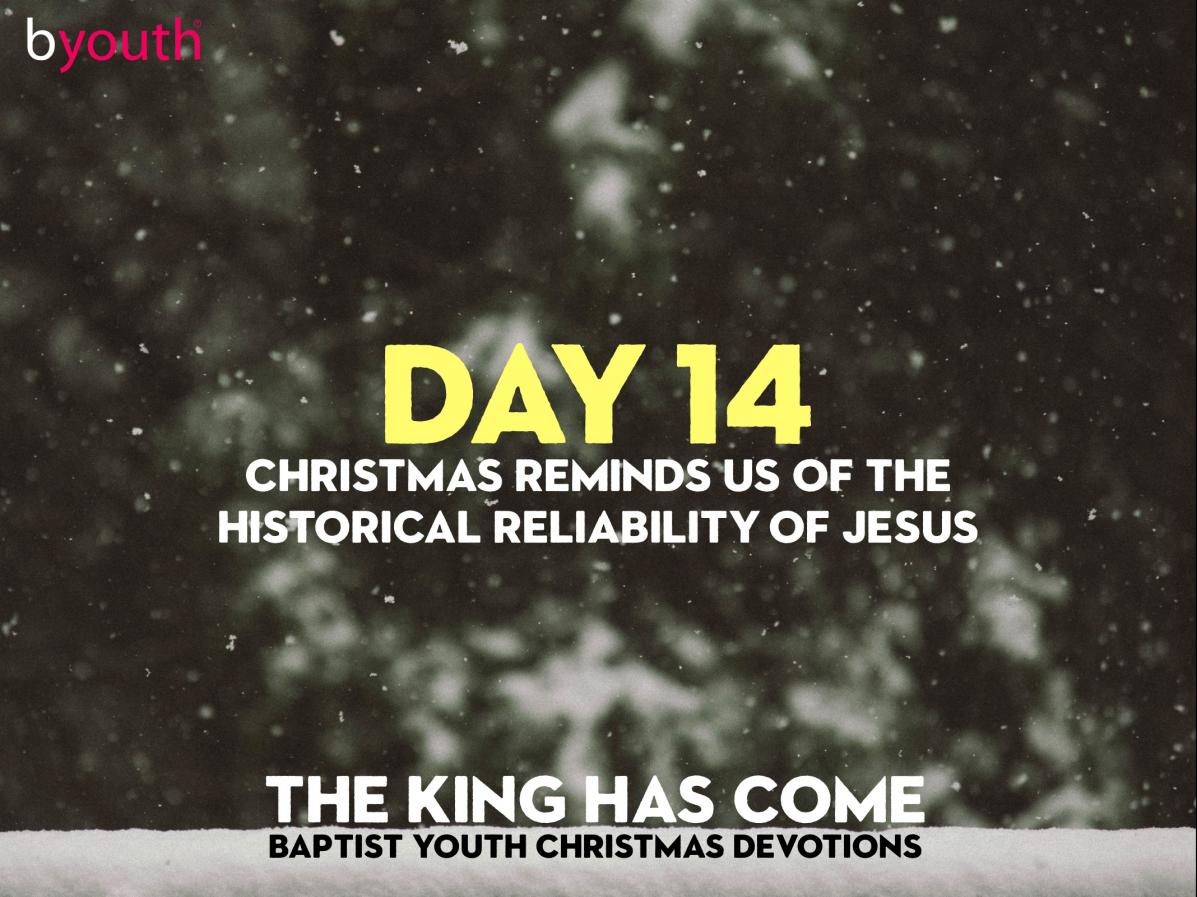 CS Lewis has many amazing quotes attributed to him. One such quote which is particularly thought provoking, however, is taken from his book entitled 'Mere Christianity.' In it, Lewis considers who Jesus really is. Ultimately, Lewis says, Jesus can only fit into one of three categories: Either Jesus is a liar, a lunatic or, he is in fact, Lord. I have found this quote so helpful when thinking through the claims and actions of Jesus. Of course, many people in the Scriptures, as well as in our world today, will chose one of these first two options. But as Christians, we obviously believe the latter to be true - Jesus is Lord!

But how can we be sure that Jesus is Lord? Of course there are many ways you could answer that question. One way we can be sure, however, is in the historical details found within the Scriptures. As we consider Luke 2:1-7 for the next couple of days, the first few verses show us some of this historical significance. When Luke records the details regarding the birth of Christ, he doesn't give us some vague descriptions about where and when Jesus was born - quite the opposite! Luke, as he writes his entire Gospel, goes to great lengths in order to present an 'orderly account' (1:3) so that his reader may have 'certainty' (1:4) regarding who Jesus is.

Look at the historical details Luke includes in this passage regarding when and where Jesus was born. He writes,

1 In those days a decree went out from Caesar Augustus that all the world should be registered. 2 This was the first registration when[a] Quirinius was governor of Syria. 3 And all went to be registered, each to his own town. 4 And Joseph also went up from Galilee, from the town of Nazareth, to Judea, to the city of David, which is called Bethlehem, because he was of the house and lineage of David,

Notice how Luke includes specific names of people, places and events. Luke is precise in reporting the events surrounding Jesus' birth. He roots it in real, historical events. These historical details won't mean much to you and I since they occurred a couple of thousand years ago. But for Theophilus (the man who Luke writes his Gospel to) and other early readers, these specific historical details would go a long way in adding credible evidence to Luke's message.

Remember, Luke released his Gospel account somewhere around AD 60. This means that some of his first readers would have been alive during these historical events described in verses 1-4, these events occurred in their lifetime. These early readers would have been well aware of people like Caesar Augustus and Quirinius, they maybe even saw them in the flesh. They would had walked the streets of Bethlehem and Judea.  Some of these readers may even remember the moment when this decree was issued, or perhaps they heard their parents talking about it. Luke makes no attempt to cloud the birth of Jesus in vague historical detail - he is extremely specific and assured.

Why is all this so important? Well, it should give you confidence in the Bible! it is helpful to remember that each of the Gospels in the New Testament, including that of Luke, have been viewed as credible sources of historical detail throughout the centuries. Many of the oldest historians who were alive just after Luke's generation testify to his historical reliability. Imagine, for a moment, that Luke made all of these details up. His Gospel account would never have got off the ground. There would be an influx of his generation, who were witnesses alive at the time of Jesus, who would have testified against the historical reliability of the events recorded.

Let me illustrate this for you in. Imagine that, tomorrow morning, I wake up to a news report on the BBC. The headline grips me because it talks about an incident which occurred in the Gracehill primary school playground in September 1999. You can bet that I am going to read that headline. Not only that, I am going to read that headline with particularly critical eyes. Why? Because I was at Gracehill Primary School in September 1999. Furthermore, I was more than likely in the playground at the exact time this 'incident' occurred. Therefore, if the events recorded are false, you can bet that I will give the BBC a phone call, informing them of the serious inaccuracies regarding their report. In fact, it wouldn’t just be me, there were a couple hundred other people who were alive and present in Gracehill primary school in 1999 who can also deny the reality of that particular incident. The story won't get off the ground - it will be immediately discredited. In a couple of years, people wouldn’t even remember the story existed.

Imagine, however, this exact BBC report gets released, not tomorrow morning in 2018, but in 100 years in the year 2118. At that point, the BBC reporters can really say what they want. Why? All the witnesses who were present at the scene are now dead. To disprove the events becomes a lot more difficult.

What does this all mean? Well, if you release a historical document shortly after the events unfold, you better be sure your details are accurate. Otherwise, your historical document will be discredited and won't stand the test of time - the eye witnesses will immediately rip your story apart.

Yet, here we have Luke's Gospel account, released within the lifetime of witnesses to Jesus Christ. It tells us about one of history's most significant moments - God being born in human flesh. He releases his report shortly after the event and roots it in real historical detail. He makes no attempt to pull the wool over the eyes of his early readers. In fact, Luke does uses eye witnesses to compile his report (1:2).  In other words, Luke wants us to have utmost certainty regarding what we are about to read.

The Christmas story isn't a myth, it isn't fantasy. Rather, the Gospel truth we celebrate at Christmas is a real, historical event. Of course, it is unlikely that these events occurred in December. However, regardless of what month they took place, the reality of Jesus' birth  can be trusted and believed, even by the most logical of minds. Yes, as believers we need faith - But this faith isn't on shaky ground. God has blessed us with historical evidence regarding the truth of his Son: The Lord Jesus. Pray that God would use this to give you further confidence regarding your belief in the life and finished work of Christ today. Is Jesus a liar? Is Jesus a lunatic? The evidence supplied by Luke, our master historian, would suggest that Jesus is in fact, LORD!

1)  How has todays passage given you confidence regarding the reality of Jesus' coming to earth?

2) Based on todays devotion, how would you respond to the accusation this Christmas that 'the story regarding Jesus birth is a fabricated myth?'

3) How does the historical reliability of the gospel cause you to praise God today?

God, thank you for the Bible. Thank you that it is rooted in real history which can be relied upon. May the reality of Scripture thrill my heart and increase my desire to spend time in it daily. I ask that the credibility of the Christmas story would give me the confidence I need to share it with someone I know today.